By Walt Kania in General 2 Comments

Are you at the keyboard all day? 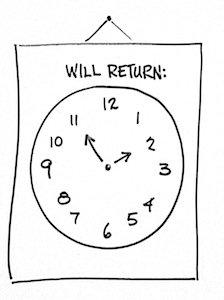 Are you always there in the studio during business hours? Do you dutifully put in your eight hours at the easel every day?

Maybe you should quit that. Lot of wasted time there.

To do remarkable and consistent work, don’t you have to show up and be there day in day out?

And to make a decent living, don’t you have to put in the hours?

Absolutely. But not all in a row.

Consider writer Jeffrey Archer. He has been turning out beloved best sellers like Kane and Abel one after another for thirty years.

(The kind of writer that other writers want to smack.)

When doing a book, Archer writes diligently and methodically, without fail, for eight full hours every day.

But only for two hours at a time.

In between, he goes about life as usual. He gets a haircut, eats a meal, goes to the bank. Whatever.

But isn’t that too fragmented and disjointed? How do you get in ‘flow’ when you’re always starting and stopping and chunking up the day like that?

And who wants to still be working at 8 pm anyway?

Fact is, the people who study such things say that Archer has accidentally tuned into the way our brains are wired. Which means he gets more done, and better, in his eight hours than we do in our eight hours.

Because apparently, we are naturally equipped to ‘go deep and hard’ for only about two hours at a time. (Author Tony Schwartz says it’s ninety minutes, based on work by Anders Ericsson. Close enough. And sorry for the almost footnote.)

Our energy and mental acuity ebb and flow in these cycles all day long. Even during sleep.

Trying to do anything all day, or even for four hours is counter-productive, draining and tedious. (Yes, even that.) The time is wasted. And the work is mediocre. And half the time, you’re yanking on a dry pump.

For the kind of work we do, think in terms of work sessions, instead of work days.

Thing is, you’re probably working like this already, without realizing it.

I certainly was, back when I was making a grand pretense of staying in the office all day.

I’d draft an article for maybe two hours until I got stuck, so I’d check my email. Answer a few. Then I’d ping pong around Wikipedia for a while, land on a You Tube Interview with Francis Ford Coppola, call up my friend Bill and bitch, fiddle with the CSS on my website, then work diligently to get a sesame seed unstuck from a tooth with a straightened paper clip.

Which all took about ninety minutes, at which point I would drag my ass back to the article for a little while.

I’d do this pretty much all day.

What to try, tomorrow

Begin when you want. Noon? 4pm. You pick.

Me, I start with a session at 6 am or so. I’m pure then. The critic in my head doesn’t get up till much later. The one who looks over my shoulder, with sour coffee breath, “Is that what you’re using for an opening? Be freakin’ original for once.”  In those two hours, I get my licks in, unpoked at.

Two hours in, two hours out.

In between, leave the desk. Leave the apartment. Cut grass, wash the car, drive the kids somewhere, nap.

Don’t worry about being accessible to clients. You have set your voice mail on four rings.

When you’re back at work, though, you work. There is no Twitter. No nothing. Go deep into the work. Get lost in it. If you read this blog when you should be working, I will know it.

Two on, two off. Four sessions.

Are you nocturnal? Do your sessions all night. My friend Bill has been working the graveyard shift for ages. He’s single so he can get away with it.

(By the way, we humans used to sleep in two separate sessions, too. Before electric lights and cable messed it all up.  See segmented sleep. Do a session in between if you want. Write and tell us about it.)

People will think you goofy and unemployed. But we’re freelance, so we don’t care what they think.

Also, you know how, when you’re taking a shower, or waiting in line somewhere, and all of a sudden you get a flash and you finally know how to fix that thing you couldn’t figure out before?

That can easily happen three or four times a day now. When you’re off doing whatever. You get back to the desk later and you know how to do it. You know how to get that damn <div> to quit moving around. You have a better headline.

It’s almost as if your muses can’t wait till you get up and leave. “Thank God, she’s gone. Let’s get this done.”

You will get eight hours in and not be so drained and frustrated. And see if the work isn’t better. And you will probably get more of it done.

Try this tomorrow. Or the day after. If you hate it, no harm. Go back to the other way.