How to have a damn good year: Advice from the renegade roundtable, Part I

You want to have a good year freelancing. Who doesn’t?

But how do you do that? What will work? What won’t work at all?

I’ve been asking the die-hard freelancers in my circle. Grizzled pros, and annoyingly successful upstarts. They have all had good years, galactically stellar years, and not-so-good years.

We debated and swapped stories over beers and late-night phone conversations.

How do you make this a kick-ass year?

Here’s the consensus, straight from the front lines.

Make it a really good day

A year is too wide a canvas to paint on. It’s too vast to get your arms around. It’s an imaginary concept.

Plus, a year gives you too much slack.  “Well, there is always June and July.” I frittered away too much good time thinking like that.

For what you and I do, it’s more productive to focus on delivering good days. (“I realized,” said illustrator Jake, “That my ‘banner year’ was actually just 200 or so solid work days in a row. Good work days with no screwing around.”)

You don’t want your mind hovering out there in June and July. You want your head deep in the work that is on your desk right now. You have calls to make, emails to get out, clients to find. There is a screen in front of you that needs filling up. Start there.

Hit the desk this morning with all you’ve got. You want to end the day around sunset, delightfully spent. The studio littered with sawdust and shavings, your hands smudged with paint, a stack of pages on the desk.

Personally, I get a huge buzz from a turning in solid day’s work, knowing that I really laid the brick. (As compared to that despair and disgust I feel after a day of avoiding work.) Plus, I like getting a buzz every day around 5pm or so.  No need to wait for the year-end figures.

Do really well today. No frittering.

Skip the goal-setting, the resolutions

“I must have set 37 goals for myself, or maybe 148,” my designer friend Dave says. “Really good and audacious ones, too. I set goals for money, for numbers of clients, for quotas of work, for Hawaii vacations, for getting famous, for landing famous clients.”

“None of that moved my freelance career ahead one weiner’s length.”

Didn’t work for me either. Ever.

A few weeks back, I was crawling around under my desk reconnecting everything after the big hurricane Sandy. 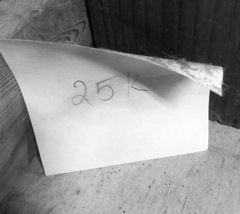 Deep in the dust behind the cabinet I found a dried-out, curled up sticky note.

It says ’25K’. All smudged and covered in fuzz.

I’m guessing that one afternoon in 2006, or maybe 2007, who knows, I had pounded fist to palm and declared I would henceforth be aiming at an income of 25K a month. So I inscribed the sacred number on a sticky note.

Of course, maybe nine days later, or sometime in the spring, who knows, that sacred sticky note wriggled free and dropped out of sight behind the file cabinet. And there it lay.

Which is why most of us have quit that goal setting business. Sounds nice and self-helpy, but it doesn’t work.

For one, it can easily become a feel-good salve. Something bugging you? Set a goal. You feel better, more determined. For a while. It becomes a dumb habit. Nothing much changes for long.

And, as one veteran put it (I can’t remember who, since there were beers involved):

“If it were really a goal of yours, something you wanted in your gut, you’d be shooting at it already. It would be unconscious. It would be subtly shaping everything you do all day, every choice you make. You wouldn’t need a dumb sticky note.”

(I know. The gurus will argue that we didn’t do goal-setting right, that we needed accountability, and we needed sub-goals, or that it’s not the goal it’s the ‘working toward’. We’re over it.)

Odd thing is, there were times when I did hit that 25K mark. Or more.

But it was never because I was aiming at it.

And my friend Elaine started landing clients left and right when she was shooting for something else entirely.

Now, see  Part II, which apparently makes some readers uncomfortable, although they really like the quick story at the end.

« Q&A: How to change freelance paths» How to have a damn good year: Advice from the renegade roundtable Part II